November 6: Memory of the Redemptorists Martyrs of Cuenca, Spain

Home / November 6: Memory of the Redemptorists Martyrs of Cuenca, Spain

On November 6, the Redemptorist Family celebrates the memory of the six Martyrs of Cuenca. Faithful to their call to witness to the Redeemer, they gave their lives during a time of civil war. Our world continues to be wounded by violence and division – political, social, religious. In solidarity with these blessed Martyrs, our brothers may be live as prophetic witnesses of the Redeemer who gave his life to reconcile all people, and to unite us as members of the family of God.

José Javier Gorosterrazu Jaunarena, 59-year-old professed priest. As a researcher and missionary in Spanish (Castilian) and Basque, he brought together in his life the proclamation of the Gospel with philosophical scholarship and historical research. He had a great sensitivity for the local culture of the people whom he evangelized. He preached many retreats and spiritual exercise to nuns, especially the Redemptoristines. He died together with Brother Victoriano. Both were attached to each other by the arm.

Ciriaco Olarte Pérez de Mendiguren, 43-year-old professed priest. He was a missionary first in Mexico, and then in Spain. A friendly and outgoing person, he won people over by his character. The persecution of Plutarco Calles had made it necessary for him to leave Mexico. He preached many retreats to the Oblate Sisters and the girls whom they gathered together. He died together with Miguel Goñi. They gave each other absolution.

Miguel Goñi Áriz, 34-year-old professed priest. Despite his delicate health and his rather timid character, he was a tireless preacher of popular missions and an admirable confessor. He was an intelligent and valuable man both for preaching and for worship services in the Church. He was always available to do whatever was necessary. He was ordained a priest on September 27, 1925. 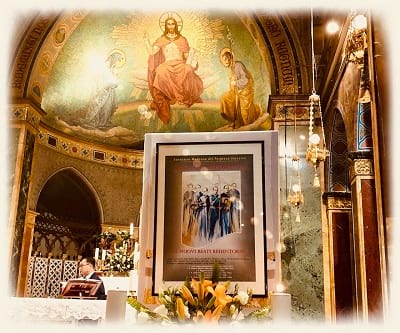 Julián Pozo Ruiz de Samaniego, 33year old professed priest. He was an extremely good man who captivated everyone with his smile. Since before his ordination, he was sick with tuberculosis. But his human qualities and his spiritual depth matured through this illness. His heart, his eyes, and especially his smile even in illness, spoke of God.

Victoriano Calvo Lozano, 40-year-old professed religious Brother. He is the second Redemptorist brother to reach the altars. A person with a very simple training, he possessed great wisdom and knowledge in the ways of God. He was dedicated to simple tasks such as porter, sacristan, tailor or the orchard, and he spent much time in silence and prayer. He was also dedicated to spiritual direction.

Pedro Romero Espejo, 65-year-old priest. He was a missionary for many years, but little by little, he had to leave this work behind because of personal difficulties. He had to take his limitations seriously, and because of this, he came to live the life of a monk in Cuenca. When the persecution came, in order to continue to freely live his fidelity to the missionary life, he lived as a beggar in the streets of Cuenca. Thus, in the midst of the persecution, he was able to offer pastoral care to those who asked. He was imprisoned and died from the hardship inflicted on him.

Strong in faith, rejoicing in hope, burning with charity, on fire with zeal, in humility of heart and persevering in prayer, Redemptorists as apostolic men and genuine disciples of Saint Alphonsus follow Christ the Redeemer with hearts full of joy