Inauguration of the Bicentenary of St. Clement Hofbauer in Bangalore

Home / Inauguration of the Bicentenary of St. Clement Hofbauer in Bangalore

The Redemptorist of the Province of Bangalore inaugurated the Celebration of the Bicentennial Anniversary of the death of St. Clement with prayer services in honour of our saintly confrere in two of our Bangalore parishes. On 14th March, the celebration took place at Holy Ghost Church, Richard’s Town and on 15th March at Holy Redeemer Church, Hennur. The event was organised by the Commissions for the celebration with the assistance of the Parish Clergy. 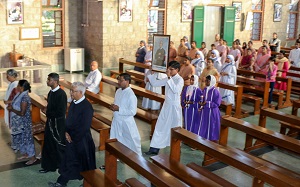 in our joy. Many Redemptorist confreres who were present in Bangalore also attended this gathering. The Redemptorist theology students from Mt. St. Alphonsus sang the melodious entrance hymn, ‘Jubilate’ as Fr. Provincial Edward Joseph carried the image of St. Clement Hofbauer in procession up the aisle and installed it in the decorated stand that had been prepared for it in the sanctuary. Fr. Sandeep Menezes gave a brief introduction in which he explained that the purpose of this Bicentennial Celebration is to emphasize the relevance of St. Clement for our times. He informed the gathering that during the course of this year, there would be monthly activities organized for the parishioners on every 15th day of each 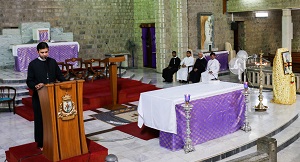 month (or the Sunday closest to it). These activities would promote awareness about different aspects of his life and virtues among them. A 10-minute doodle video on the life of St. Clement was then showcased to the gathering. This video was prepared by the Redemptorist Media Center under the leadership of Fr. Charles Vijay. Following this, Fr. Anthonyswamy, the parish priest of Holy Ghost Church, proclaimed the Gospel from Luke 4:16-21. Fr. Juventius Andrade, the leader of the Commission and a Provincial Councilor, gave a reflection on the relevance of the life of St. Clement for us today. To conclude, Fr. Joseph Beck led the gathering in a concluding prayer 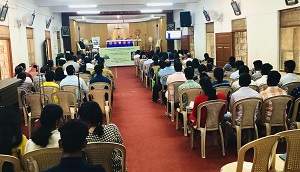 and the choir led the final hymn. A similar pattern was followed on the following day at the Holy Redeemer Parish in Hennur following the 9.30 am Mass in English. In Holy Redeemer Church, a short prayer service was conducted by the parish priest, Fr. Christopher Ponnusamy, at 7.45 am in Kannada before the 8 am Kannada Mass began. At both parishes printed souvenirs to commemorate the Bicentenary year were distributed to the people.

Here is a summary of Fr. Juventius Andrade’s reflections during the dual celebrations: He emphasized 5 symbols which summed up certain virtues of 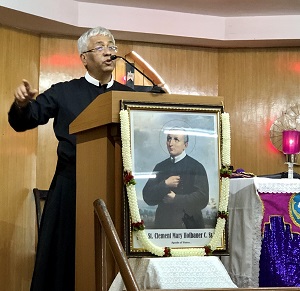 this great missionary’s life. First, a star, which represents St. Clement’s visionary leadership. He reached for ‘the stars’ in pursuing his twin dreams of becoming a priest and a zealous missionary even though it took him over 34 years to accomplish them. He inspires us today to give our all to achieve the dreams that Jesus inspires deep in our hearts – whether we are priests, religious or laity. The second symbol is the ladder. It represents the quality of bridging distances and overcoming obstacles. This was seen in his ability to take the Congregation across the high mountain range of the Alps to enter into Austria, Poland and other neighbouring countries. The ladder also represents the other ‘obstacles’ which Clement was able to conquer in the spread of the Gospel - culture, language and ideology. These are obstacles we need to overcome in our days too. The third symbol is the interlocked hands. They represent St. Clement’s ability to foster dialogue in a climate of great conflict and hostility especially through the Hofbauer circles he established for university students, intellectuals and artists. This is a value we definitely need to put into practice when faced with situations of polarization and hatred. The fourth symbol is that of clay, a symbol of creative hope moulded by circumstances. St. Clement went out to people when people would not come to Church. He teaches us that the Church does not belong only to the sanctuary but also to the marketplace. What new initiatives can we come up with in our times to reach out to Church dropouts and those left behind in society? Finally, the symbol of the earthworm represents St. Clement’s perseverance. Like the earthworm which comes up with a new exit point when one is covered up, St. Clement always found new avenues for proclaiming the Good News when faced with obstacles elsewhere. For example, when the environment in Austria proved hostile, he began the mission at St Benno’s. When the doors for mission seemed closed for him in Warsaw, he returned back to Vienna. Thus, the earthworm symbolizes Hofbauer’s flexibility and adaptability to serve the needs of the mission. To conclude, Fr. Juventius said that there’s another central symbol to be emphasized which forms the background to all the other 5 symbols – the heart. It was the heart which symbolizes St. Clement Hofbauer’s conviction that he was deeply loved by God and that he was called to love others because of this love which led him to - pursue great dreams in the service of God (star), overcome obstacles in reaching out to people (ladder), to foster dialogue among people (interlocked hands), to express creative hope in every circumstance (clay), and to discover ever newer ways of preaching the Gospel (earthworm).

May we all be inspired by our dear St. Clement Mary Hofbauer to give flesh to these values in our times and places. St. Clement Hofbauer, pray for us! Amen.

Strong in faith, rejoicing in hope, burning with charity, on fire with zeal, in humility of heart and persevering in prayer, Redemptorists as apostolic men and genuine disciples of Saint Alphonsus follow Christ the Redeemer with hearts full of joy